My brand new iPhone 6 Plus has died on me and it's not turning on. The battery was fully charged before it died. I've tried everything but nothing seemed to turn it back on: soft reset, hard reset, put it in dfu mode, press and hold Sleep/Wake button and Home button together for 15 seconds as suggested. It's just totally dead. Incredibly disappointed at this.

It looks like you have a dead iPhone and you're having issue with reviving it and switching it on. Whether it's the drained battery, the crashed software, or even the faulty battery and other hardware faults making your device appear dead, we'll be more than happy to help get your device just working again. So, before you call Apple Support or schedule an appointment with your local Genius Bar, check out the tips about why iPhone is dead and then try each one to troubleshoot the problem. This way, you don't have to immediately throw it away.

Tip: Apple offers services for recycling a completely dead iPhone. Go to this page and learn a few steps before returning your device to be recycled.

Why is your iPhone dead, not powering up?

First rule out all possibilities and identify the root cause of dead iPhone. We may not be able to include every potential issue you encountered, but it's the most common ones.

Before starting a more advanced troubleshooting process to fix a dead iPhone, make sure you've charged the battery: plugged your phone into a power outlet using the included USB cable and USB adapter. If the battery is completely dead with extremely low power, you may need to let it charge for much longer time. 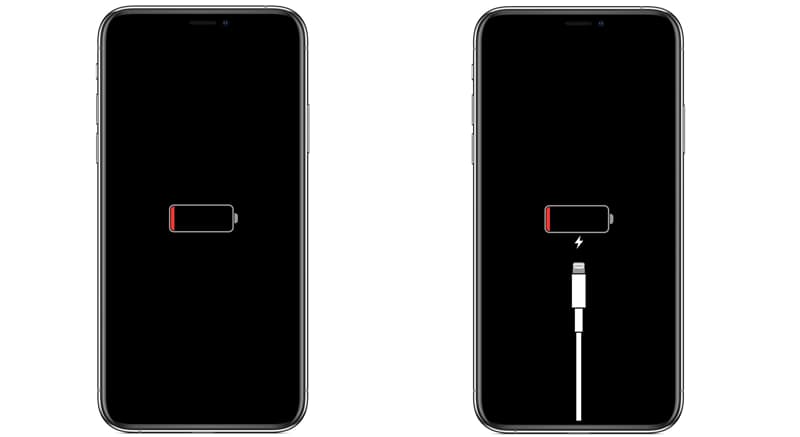 In case the jack, charging cable, power adapter and even iPhone are functionally, the battery symbol will return, and the screen should turn on within minutes. However, if the display is still black or it appears in some sort of dormant stage after charging, your device is not charging or recognizing the charger.

Tried charging but no respond? Take a look at this article for help with the battery issue. If this doesn't turn on the dead iPhone, the battery may need to be repaired. Move to the next step to determine whether you have software-related issues.

Hard Reset your device to turn it off and on

For any problem that seems likely to be software-related, a hard reset is always a good tactic and there's no harm in doing it with all content preserved. Sometimes, your iPhone needs to restart and refresh the memory when it has died or frozen - it had completely black screen and didn't react to anything. The process of executing a hard reset of iPhone depends on which model you own.

If you're using iPhone 6s, 6, SE (1st generation) or other earlier generations of iPhone, the Power button and Home button should do the trick:

For iPhone 7 and iPhone 7 Plus:

At this point, you can see if a hard reset has resurrected your dead iPhone. If not, you may encounter a more touch software problem that is responsible for a dead iPhone with black and blank screen. Continue to read and remedy the issues.

You may experience this "I restored my new iPhone X from my iTunes backup to get my texts and photos back. Proof... it went dead and won't turn on." Other times, "with the iOS update, your iPhone crashes, and it never comes back. The screen remains black even after many attempts of hard reset it." If the root of the problem is a software crashed, then running an iOS troubleshooter will save the day permanently.

iOS System Recovery comes with a powerful troubleshooter which can do the job nicely. It's capable of fixing any software-related bugs that can have a significant impact on your iOS devices and overall system performance. That way it would be easier for use to determine the underlying causes when iPhone suddenly died and screen went black. Frozen & Dead display, stuck Apple logo, restart loop, not turning on and any other issue can also be repaired in a few steps.

Try fixing the dead iPhone that is not powering on or frozen with the following steps, no matter what iOS version your device is running on. Eventually your device should install a latest version of iOS with all errors eliminated.

[Also Read: How to Retrieve Text Message on iPhone from iTunes Backup]

Put your device into DFU mode to restore it

If none of the above-mentioned methods dis not fix the iPhone that is dead, you should try a DFU restore. This is the deepest type of restore, and can be your last hope for success to get your phone alive. Before you do it, back up your dead device if possible:

Unluckily, if iTunes or Finder can't recognize your phone, you couldn't make a backup of it and you will lose all data after a total factory reset. Here's how to put a dead iPhone to DFU mode to restore it and resolve the software bugs.

On iPhone 7 and iPhone 7 Plus:

On iPhone 6s, 6s Plus or earlier models:

If your issue persists—the iPhone is dead, the display is unresponsive and frozen after following all of the steps above, you may have no resolution but to set up an appointment with Genius and take it to Apple Store. If your device is under warranty or if you have Apple Care, Apple will fix the device for free.

Diagnosing a hardware failure can be so frustrating. Most often, the hardware issues could be the culprit, most likely a display error, a battery problem or an issue with logic board. The following links should help you get started with the service process if iPhone appears completely dead:

Your dead iPhone wakes up and responds

Well your dead iPhone should turn on and working fine! Here are all our top troubleshooting tips for all iPhone iterations that go dead and are going to be totally unusable.

How to Recover Contacts on Android

How to Transfer Call History from iPhone to Samsung Phone

How to Fix an iPad That Won't Update

How to Solve an iPhone 11 Stuck on Apple Logo