It's common to block contacts we dislike, while sometimes they send us important messages and we can't receive them on time, which is annoying.

Are you being harassed by someone on your phone? Is a friend of yours trying to play a practical joke on you by sending constant texts and phone calls? Or have you had enough of receiving calls or texts from a particular call center agent? If you suffer any of these situations, you might just block the number on your Android phone to get rid of it.

However, you are not able to access messages from those blocked contacts, either. So, what should you do if you want to recover blocked messages to your Android smartphone? A common question that arises, in this case, is whether or not you can retrieve blocked text messages on Android. Android Data Recovery can help us cope with the trouble. But before that, we can try a common method to recover blocked messages on Android device.

Can I view blocked messages on Android?

After blocking someone on Android, you can retrieve their blocked texts. Some Android phones have a specific folder to save these blocked messages, or you can use Android Data Recovery tool to recover those texts if you deleted them accidentally.

Common method for getting blocked messages on Android

It's common to recover deleted texts on Android by asking phone carriers, while we cna't guarantee that the phone carriers will keep blocked messages. Therefore, we recommend you to check the specific folder on your Android smartphone since the latest Android versions allow you to perform numerous things, such as viewing prohibited SMS on your Android smartphone. To view blocked messages: 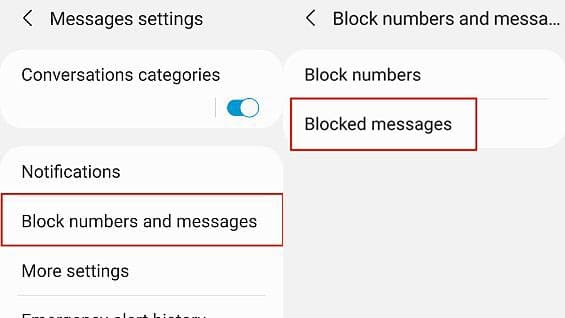 Or you can simply unblock the person and ask him to send it again. It would be a little embarrassing but can be helpful sometimes.

If you can't discover the function mentioned in the previous part, or if you notice it, but there's nothing in the list while you're confident you've gotten blocked SMS on your Android smartphone, don't worry, there's another way to find them. When the aforementioned approach fails, the best option to recover blocked text messages is to use Android Data Recovery.

Android Data Recovery is a professional program that allows you to directly recover various types of data like blocked messages, WhatsApp messages, photos, texts, etc. from Android phone and SD card. It works well on a wide range of Android models with high recovery success rate. Simply use this sophisticated app to get your blocked texts back from your Android phone.

After installing and launching Android data recovery for Android, connect your Android phone to the computer using a USB cable.

Allow your device to activate USB debugging mode when there's a pop up on your Android screen. If there's no pop up, you can activate it manually. 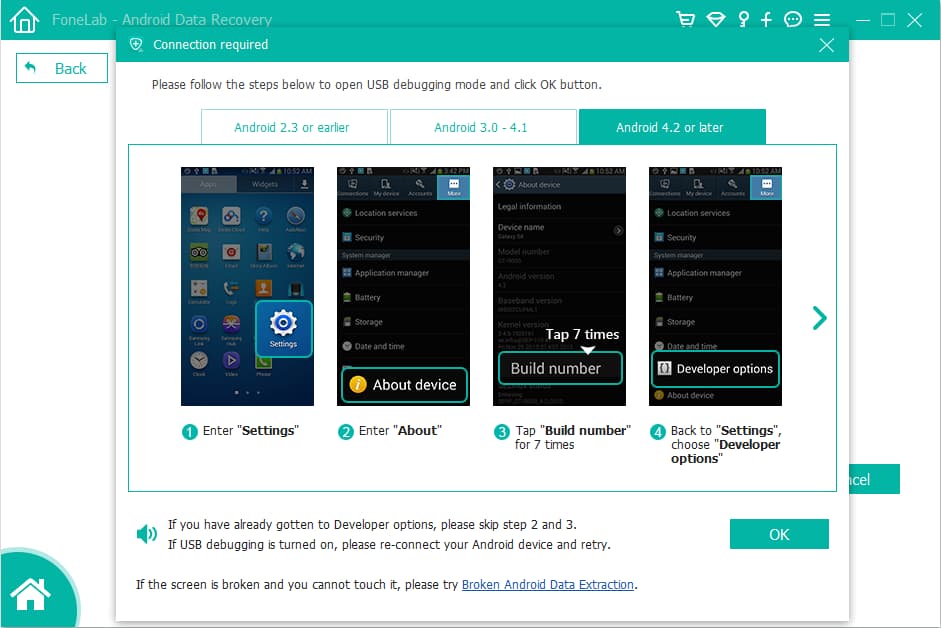 Step 2: Root and scan the device

Then you can tick Messages and other desired data to scan. Before the scanning process, Android Data Recovery will ask for root permission, then it can throughly scan your device. This process will take some time. 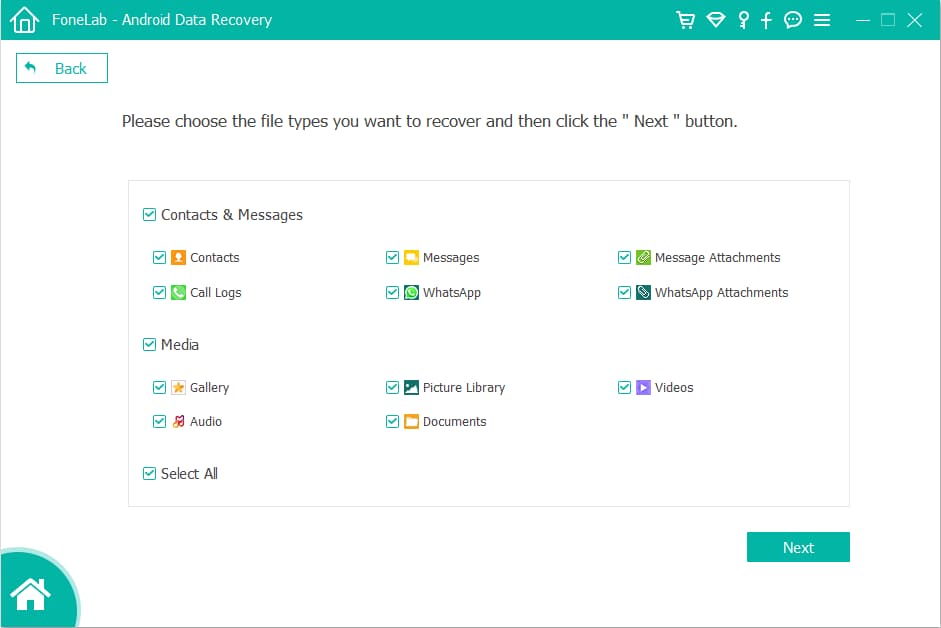 After the process finished, all the scanned data will be neatly presented on the screen. You can select blocked messages and other needed data you want to recover. If there're too much data, you can toggle on Only display the deleted item(s).

Click Recover and save those selected files into the output folder. Later, all your Android data are restored. 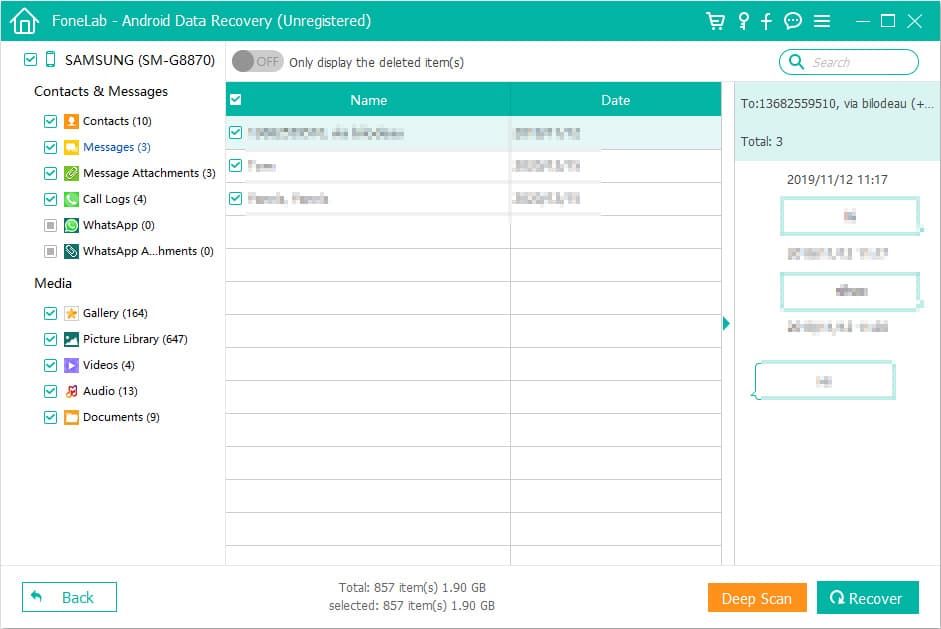 FAQs about blocked contacts and messages

Can I know if I was blocked by someone?

No notifications are sent to the blocked user. His/her SMS will not be delivered when attempting to contact you. The individual will only be able to comprehend afterwards. The message will not be transmitted to the person who has blocked the number on an Android phone if the banned number messages you. If you think you've been blocked, try phoning the person from a different phone. Whether you use your work phone or borrow a friend's phone makes no difference. If you can't reach someone on one phone but can on another, you've been banned.

We can't deliver you an exact answer, but it's a good idea to ask your phone company. Each carrier has its policy.

Can I view blocked calls on Android inbox?

Many Android users are having difficulty retrieving SMS texts that were banned. However, if you follow the steps highlighted in the article, the process will be rather straightforward to complete. We hope it retrieves every one of the blocked SMS you wanted to read on your Android phone. Use Android Data Recovery tool to retrieve all the text messages on your Android phone.

After adding someone to your block list on an Android phone, you can prevent them from sending you text messages or contacting you. Many individuals use their Android phone's block list to avoid being bothered by unwanted messages or calls, but, in any situation, if you would like to re-read them, this article has got you covered.

How to Put WhatsApp from Android to iPhone

Transfer Contacts from Android to Android

How to Recover WhatsApp Photos on Android

How to Recover Blocked WhatsApp Messages on Android