Apple Music keeps crashing: how to fix it on iPhone & iPad

Is Apple Music crashing on iOS 14, iOS 15 or any iOS after you update the device? Check out this guide and be free of all the worries.

If your Apple Music app keep crashing after iOS update, the app closes whenever you play certain songs, or it's crashing and freezing all the time even if there's loads of memory left, try these troubleshooting steps to get it to work:

If Apple Music has been updated to its most recent version - but it's still crashing, there are other methods below you can take to resolve the issue.

Apple Music is an industry-leading app for streaming music, where you can enjoy your favorite songs anytime you desire. It usually runs well on iPads and iPhones, but sometimes it crashes, it becomes unresponsive, or it can't open.

There can be more than one reason why the Music app on your iOS device is not behaving. The major one is that iOS isn't working properly. It usually happens when users have an older device whose software isn't updated. A malfunctioned iOS update could also be to blame.

Sometimes, the Apple Music crashes have to do with storage space. The issue keeps occurring if you've downloaded a lot of songs within the app on the iPhone which carries limited free space. No matter which situation you're in, use these tips when you're having issue with Apple Music crashing and unexpectedly closing and to get it working again.

Let's look at each of these in more details to understand how you tackle with the problem.

Each time a new iOS is released, it brings optimized features and bug fixes to boot the overall performance of the iPhone. If you notice any crashes in Apple Music, updating an iPhone or iPad to the latest version is the first thing you should do. Here are the following steps on how to update your iPhone or iPad.

1. Make sure your device is plugged into power and connected to a stable Wi-Fi network.

2. On iPhone or iPad, go to Settings, tap General, then tap Software Update.

3. Tap Download and Install to download the software. Once done, tap on Install Now and you're all set to go.

However, iOS update can contribute to this frustrating crash. Some hiccups pop up out of the ordinary and cause glitches in the system, your apps will keep crashing like the Apple Music in question. This is where the next option comes in.

Having an updated Music app could also get the issue fixed. You need to go to App Store and check if there's a newer update for the apps.

In case you're in the situation where the Apple Music starts crashing and freezing terribly since the latest iOS has been installed, then the problem lies to the bugs with the software. The next solution - if a restart, hard reset, app update, fully closing Apple Music won't help, is to rule out the root of the matter and troubleshoot the software-related issues on the iPhone and iPad.

You can run iOS System Recovery software on your own, and with a few simple clicks, you can diagnose the glitches troubling your iPhone and iPad, and enhance the performance to make anything work smoothly.

The application offers Standard Mode to fix 150+ common issues without data loss. It just re-downloads the firmware which makes the Apple Music app not crash any more. The Advance Mode is available for fixing any stubborn error by restoring the device to factory settings - but you don't have to do this as the former one always does a competent job.

The software is quick and easy to manipulate. Here's a step-by-step guide.

Step 1: Do some preparations

If the issue persists, try restoring your iPhone or iPad from a backup (if you have one). The important thing is to be sure that you have plenty of available storage space on your device. Sometime you'll have some issues with the Music app unexpected shutdown if there's not enough storage.

To check how much space is left in iOS, go to Settings app, tap General and select iPhone Storage. You can free up space by deleting apps you no longer use and optimizing photo storage on iCloud.

3. Delete a specific song and redownload it

Some iPhone and iPad users reported that when they're playing a song that supports Doby Atmos, Apple Music app crashes – the app closes unexpectedly and return to the Home screen. This pro tip can prove to be helpful for you:

If the song has been already downloaded to iPhone, you need to delete it and then downloaded again. In case that happens with the songs that are streaming, you may need to download it to the iPhone, delete it and stream it again.

Force quitting the Apple music app and other apps running in the background can fix the issue effectively when something stops responding to work.

You just close the apps depending on your device model, and then re-open it.

A simple restart could refresh the iOS, apps and network connections. If the Apple Music is crashing constantly, you may need to turn on your iPhone or iPad off, then back on - which will not delete your data.

If you have an iPhone X series, iPhone 11, iPhone 12, or iPhone 13, press and hold the power button and either of the volume button.

If you have an iPhone SE (2nd or 3rd generation), iPhone 8, iPhone 7, iPhone 6s or earlier, press and hold the power button.

When you see the Slide to power off at the top of the screen, drag the slider to the right. Wait a few seconds for the iPhone to completely turn off and the screen to go black.

After that, press and hold the Power button until Apple logo appears, and your phone turns back on.

When the Slide to power off appears on the screen, drag it to the right to let the device shut down. Wait for 30 seconds and power on the device and see if the Apple Music crashing issues solved.

6. Toggle Airplane mode off and back on

Suppose Apple Music crashes only when the device is connected to Wi-Fi and works perfectly otherwise, then Switching airplane mode on and off might help be beneficial. Turn off Airplane mode for a few minutes to check out if the app keeps crashing or not. Then turn its Airplane mode back on.

If the problem continues, you will need to reset the settings on your iOS device which has been an efficient problem-solving option for app crashing. Here's how, and after that, make sure to sign into Apple Music again.

Your device will shut down itself and then restart. All settings, networks, passwords and your preferences are reset to their defaults.

Also Read: What to Do When iPhone Says No Service

1. Open Settings app and tap your Apple ID at the top.

3. Restart your device and sign in to Apple music again and check if the error still occurs.

Deleting an Apple music app and downloading it again tends to resolve many bugs. However, all music you saved for offline listening will be lost. You need to redownload the music after reinstalling the app.

If your Apple Music app keeps crashing on your iPhone even after trying all those tips and tricks, try considering one question: Is Apple Music down?

Rather than scrambling to contact Apple Support to ask if there's a problem with Apple Music app, you can just head to one simple place where you can check Apple system status to see if the app is down.

Click this URL to access Apple Status: https://www.apple.com/support/systemstatus/. When you see Apple Music or its related services like Apple Music for Artists, Apple Music radio, Apple Music Subscriptions being labelled 'OUTAGE', you don't need to do anything but just wait for Apple to update or fix itself - this is because Apple's end is experiencing a problem. If everything is green here but your Apple Music app keeps crashing, you have to start troubleshooting the issue on your end with the methods above. 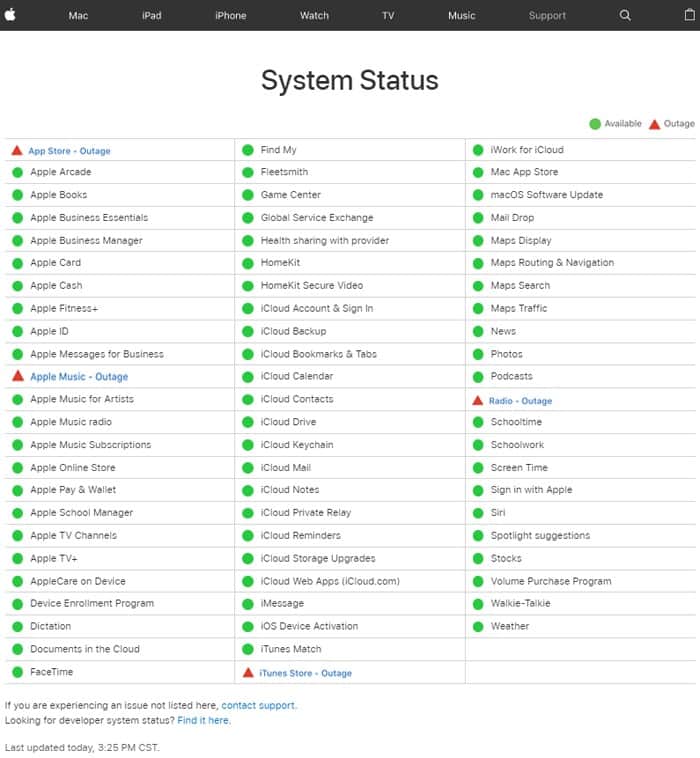 What to Do When Forgotten iPhone Passcode

How to Move Music iPad to Computer