How to watch Blu-ray on a MacBook, iMac, Mac Mini

Apple's SuperDrive won't read Blu-ray disc, let alone the lack of built-in app to play Blu-ray on Mac. But you have a few options. Here's how to watch Bluray in Mac machine.

Does your iMac or Macbook play Blu-ray? It's possible to watch your favorite movie from Blu-ray on your Mac machine, but you'll have to do some basic works.

First of all, to watch Blu-ray on Mac, you'll want to get an external USB Blu-ray optical drive for reading the disc, as the newer Mac machine no longer has an integrated optical drive.

After that, you'll need a dedicated Blu-ray player for Mac to play the Blu-ray movie; you can also play Blu-ray on Mac by ripping the disc for your personal digital collection that you can then use a default QuickTime player or third-party media player to view your movie.

With an external USB BD drive and Blu-ray player app, you can play Blu-ray on Mac computer.

It's easier than ever before to watch a movie through video-streaming services on your Mac. But that's not true for playing Blu-ray movies. Unfortunately, if you try poping a Blu-ray disc into your Mac machine, you'll quickly realize that there is no built-in optical drive to read and decrypt your disc, let alone Blu-ray playing capabilities in Mac. So how can you watch Blu-ray on Mac?

Don't fret, though. You have quite a few ways of playing Blu-ray in Mac computer at your disposal. Let's look at how they work. Also see: How to play Blu-ray on Windows 10.

What you will need:

If you're knowing nothing about Bluray players for Mac and just want to get an app that play Blu-rays smoothly, installing Aiseesoft Blu-ray Player is a good idea because it's simple to use and keeps software updating regularly to fix bugs and enhance product performance.

As a versatile media player, this Mac Blu-ray playing application is not just capable of handing content from 4K/1080p Blu-ray disc, ISO files, DVDs, it also comes with everything you need to play MP4, AVI, MOV, WMV, MKV, MPEG-2 and other digital video & audio files.

Even better, it supports Dolby Digital audio as well as DTS 5.1/7.1 channel audio, and gives you flexibility to get rich audio controls, and screen mode customization.

To play a Blu-ray on Mac with Aiseesoft Blu-ray player app, follow these tips:

1. With a USB Blu-ray drive connected to your Macbook Pro, MacBook Air, iMac or any other Mac machine of your choice, insert your Blu-ray disc into the drive. 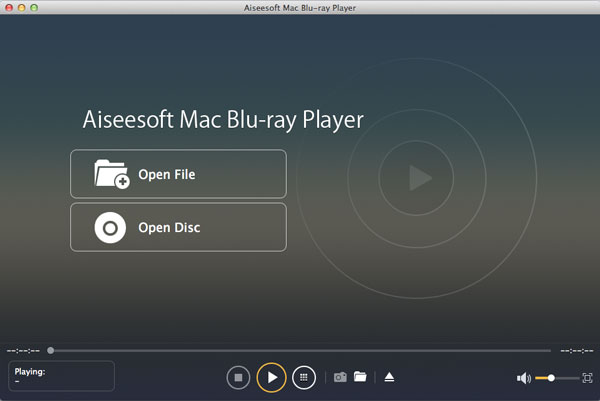 2. This Blu-ray player software should automatically detect your disc in seconds. Click "Open Disc" to load your Blu-ray. If you're playing digital movie or music, click "Open File" instead.

3. You can now click the main menu on the screen to choose the chapter, pick your audio track and subtitle. Alternatively, use the app's navigation panel at the top of your Mac menu bar to carry out your choice.

Of course, you can simply click "Play Movie" button to begin watching your Blu-ray movie on your Mac without any selection. 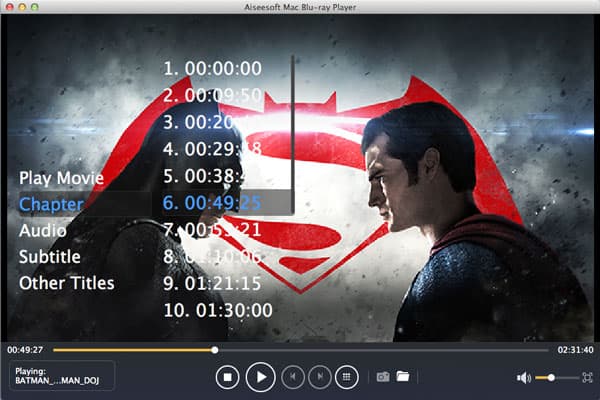 Choose your blu-ray menu to decide how you want to play the movie.

While playing the movie, you're able to pause, stop, play, go forward, go back, and even loop the movie from your Blu-ray disc.

This Blu-ray player software app also allows you to customize the size of the playing screen. You can run at Full Screen, Half Size, Double Size or Fit to Screen. 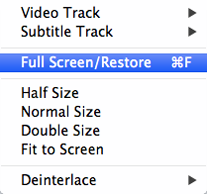 Need to save an image from your movie when watching on Mac? It's pretty much simple. Click the "Camera" icon (next to folder icon) at the bottom right side, and it instantly captures what is playing and saves as JPG, PNG or BMP image file.

What you will need:

While Blu-ray playing software offers an easy way to play Blu-ray disc every time you pop a disc into your Mac, you may want to liberate your physical disc and save the movie content locally to your computer hard drive so that you can play the movie with a desktop player anytime without limitation.

That's where Blu-ray Converter comes into place. It's an all-in-one suite that helps you decrypt the Blu-ray disc and remove the copy protection, and then convert the movie content into digital files that are playable in Mac or Windows media players. It supports a large variety of output formats, no matter it's the most commonly used MP4, MOV, M4V, MP3, or Windows friendly format such as WMV, AVI, MPG, FLAC.

To rip a Blu-ray into a video file that's viewable for Mac, check the steps below:

1. Run Blu-ray Converter on your Mac once it installed, then insert your disc into the drive.

Click "Load Disc" to import your Blu-ray movie into the program. Once loaded, you movie titles should appear in the list, along with the movie details.

Import your Blu-ray from computer to the software for rip.

2. Click "Profile" drop-down menu to select what video format you want to save the ripped Blu-ray movie to. We recommending selecting HD H.264/MPEG-4 AVC Video (*.mp4) for its compatibility and flexibity. It's fully playable on Mac default QuickTime and other known media playing apps. 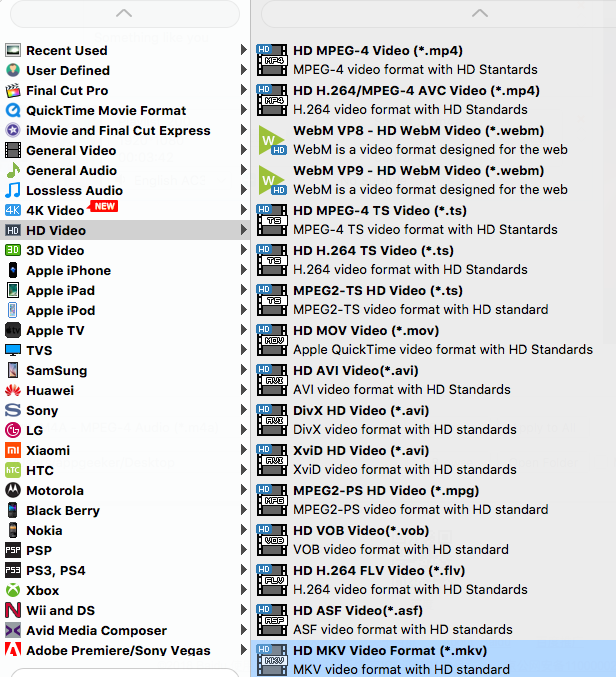 You can then click "Settings" option next to "Profile" to further adjust your conversion settings. This is not necessary unless you know what you're doing. The default values are good enough. 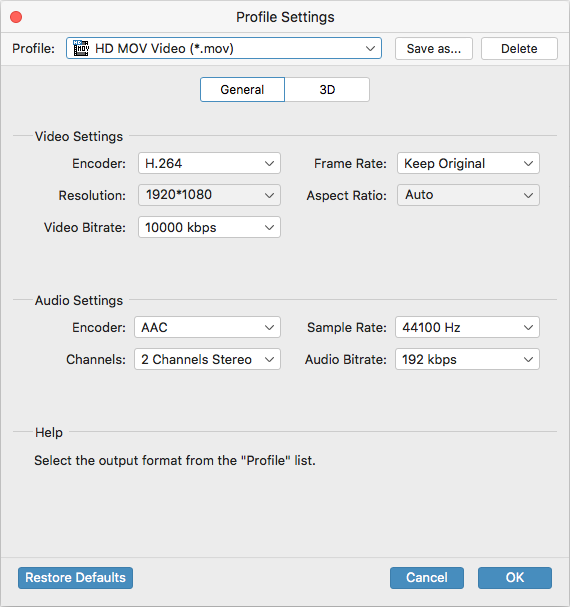 Configure your settings of conversion to get a better result.

3. Select a location to saving your conversion results in "Destination" field. Afterward, click "Convert" button at the bottom right side and let the Blu-ray Converter take care of the rest. 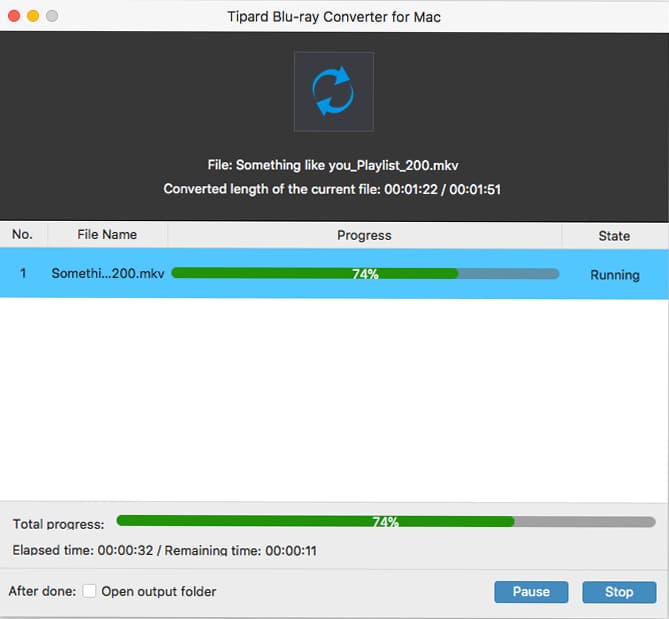 After conversion, you can play mp4 video from Blu-ray on Mac smoothly.

Once your Blu-ray movie has been converted successfully, you should get a MP4 file with high definition. Now you can open your QuickTime to play the MP4 file on your Mac.

This way, you won't to frequently insert a disc into your optical drive when you want to play the Blu-ray movie on your Mac.

How to Watch Blu-ray Disc on Windows 7

How to Export Blu-ray Movie to Hard Drive

How to Play Blu-ray Discs on VLC

How to Copy Blu-ray to Blu-ray

How to Watch Blu-ray in Windows 10