How to play FLAC music on an iPad (Mini, Air, Pro)

Known as a Free Lossless Audio Codec, FLAC is widely used for lossless music distributing among audiophiles. It is capable of compressing original audio file to 50-60% of its original size without losing a single bit of data. While with some music, FLAC may even reduced the source audios by up to 80%.

If you have a collection of FLAC music files, you might want to put them onto your iPad and enjoy at home or on the go. However, the fact is that neither Apple hardware (iPad, iPhone, iPod, ATV) nor software (iTunes, QuickTime) support FLAC audio format natively. Instead, Apple has its own format—ALAC for lossless audio playback on Mac & iOS ecosystem.

So How do you play a music file that's in .flac format on iPad?

Apple has never implemented .flac support in its products, but there are solutions that can let you play FLAC music on your iPad. In this article, we'll show you three simple ways to get the issue fixed. Go ahead to find the answers.

1. Convert the FLAC to play on iPad using a FLAC converter

One of the most efficient ways to make FLAC playable on an iPad is to convert your FLAC files to something supported natively by your iPad. With a great reputation, Video Converter is our go-to choices for converting audios from FLAC to ALAC, or other compressed & lossless formats like AAC, MP3, WAV, AIFF that iPad accepts well.

Besides getting audio files from one format to another, the software also enables you to convert among digital video formats with super fast speed and excellent quality maintenance, and extract sound tracks from videos. If you want absolute and total control over output results, you can even tweak the conversion options.

If you're on a Mac and want to convert FLAC to play on iPad, please use its Mac verison.

2. Transfer your FLAC songs into iPad directly without using iTunes

In the past, you can't really use an iPad without going through iTunes. But now the world has changed a lot. If you don't want to take the time to convert your FLAC files to audios suitable for iPad and then drop them onto iTunes to sync with your iPad, there's an tool to solve this problem for you.

See also: How to Transfer Your Music from iPhone Back to Mac

For your FLAC to iPad needs, it handles this well. It's capable of converting incompatible .flac or any other music files to iOS (or Android) acceptable format automatically before transferring. 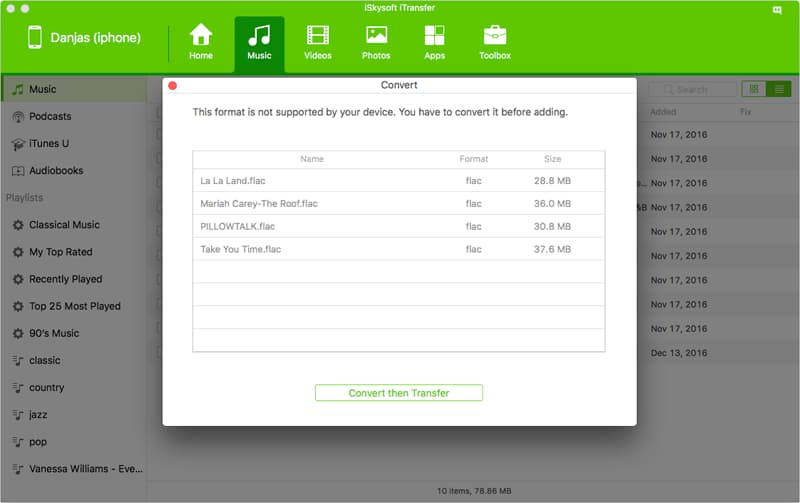 3. Install a FLAC player on your iPad from App Store

If you're unfamiliar with FLAC and just play it on your iPad, you can also get some of FLAC players (freeware, shareware) available through the App Store on iTunes.

Well there you have it; you have three ways of listening to your lossless FLAC songs on iPad, depends on your needs. While Video Converter allows you to convert .flac files to a more accessible format, as well as have full control over the quality of final video so that you then can use it on your iPad and any other kinds of devices seamlessly, iTransfer makes it incredibly easy to transfer your flac audio files to iPad without worrying about the format incompatible issues. Also, installing a third party media player in iPad from App Store is another nice option, though.

How to Copy Musis and Playlists from iPad to Blank iTunes

How to Convert a MP4 to a MP3 Audio on Mac