Having a new iPhone is an exciting thing but losing your current app data is not. Then how to manage the apps on your old phone? Here are three ways to help you!

Options for transferring apps from Android to iPhone:

Scroll down, you will be able to transfer apps from Android to iPhone without any professional help.

Some Android users may hesitate to switch to an iPhone because transferring apps from Android to iPhone is a cumbersome process for them. Sometime they'll have to hire an expert or take professional services for the app transfer, which may require much money and time. And the worst part is that your personal data may get in others' hands.

Fortunately, in this guide, we're going to talk about several efficient ways to transfer apps from Android to iPhone without any hassle. We will share the methods along with step-by-step procedure, so that you can do everything on your own.

Move from Android to iPhone using Move to iOS

For the ease of new iPhone users, Apple has made an app called Move to iOS to help with the data migration from Android to iPhone, which actually has made the app transfer simpler than ever. And you can easily get Move to iOS from Google Play for free.

If you have got a new iPhone that has not been set up, Move to iOS is your top pick to transfer your Android apps to iPhone. It works like a charm and does everything on its own. You only need to follow a few simple steps and wait for the transfer to complete.

Step 1: Make sure both your Android and iOS devices are connected to the charger to avoid any interruption. The data transfer process is a bit time-consuming, so it would be better to keep your Android and iPhone both charged.

Step 2: Connect both the devices to the same Wi-Fi network. Now, install and open Move to iOS on your Android phone. You can simply download it from Google Play.

Step 3: Grab your new iPhone, and start setting it up. When it reaches the Apps & Data screen, tap on Move Data from Android, and confirm with the Continue button. Then your iPhone will create a secret code.

Step 4: On your old Android phone, open Move to iOS app and enter the same code. And tap Connect. Then a secure network will be established between your iOS and Android devices.

Step 5: On your Android, select the apps you want to transfer and tap on Continue. Wait for the transferring process to complete. It may take a few moments to move your Android apps. Once your iPhone shows that the transfer is complete, tap on Done on the Android phone.

Step 6: Set up your iPhone completely. You will have all the apps on your new phone now. 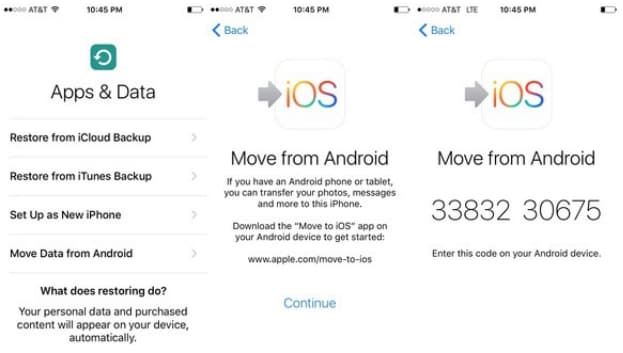 Tap 'Move Data from Android' to move your app data from old Android to your new iOS device.

Move to iOS is a good way to move apps from Android to iPhone. But the problem is that it only works on a new iPhone that has not been set up yet. If you've went through the setup process on your new iPhone, you'll have to factory reset it first, which, unfortunately, will erase all the existing content on your new iPhone.

If you don't like to lose the current data on the iPhone, you can try the next method to transfer your Android apps even when your iOS device has been set up already.

Get app data from Android to new iPhone after setup

Move to iOS is a fantastic tool, but it is only for factory reset or new iOS devices. You cannot use it on an iPhone that has already been set up. In addition, it takes much time. Thus, you might need an alternative tool to transfer your app data even after setting up the iPhone.

Here, we'd like to introduce a secure third-party tool, Phone Transfer, which is a splendid data migration tool available for app transfer between Android and iPhone. It works in all scenarios, including an old iPhone, a new iPhone, or an already set up iPhone. Requiring only one click, it gets your Android apps to iPhone without any conditions and prerequisites.

Moreover, it supports up to 6,000 Android phones and all iOS versions. Just connect your devices and select the data, then you'll get what you want from one device to another, including images, videos, call logs, messages, WhatsApp chats, and also app data.

Download and install Phone Transfer on your PC or Mac, and it will use two cables to connect your Android and iOS devices with your computer.

Step 1: Open it and go to Phone Transfer > Phone to Phone.

To transfer apps from Android to iPhone, choose Phone to Phone mode.

Step 2: Connect both Android and iPhone to computer.

Now, connect your Android phone to the computer. Then select the manufacturer of your device. For Android devices, it is necessary to turn on the USB debugging to get your phone ready for data transfer. Follow the step-by-step instructions on the screen. It won't take long. 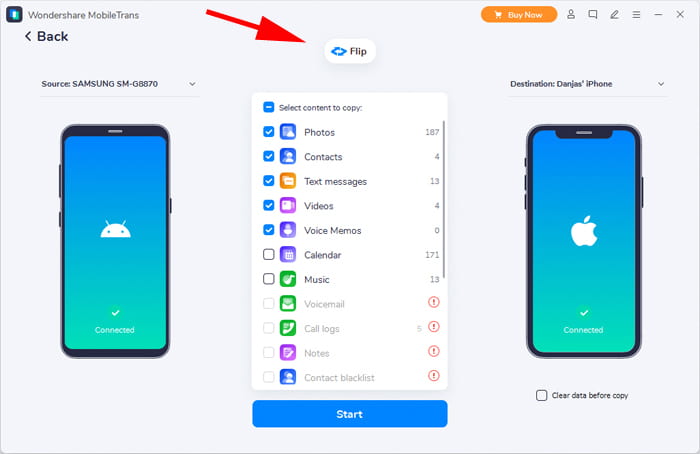 Make sure the source and destination devices are marked correctly, or hit Flip button to switch them.

Step 3: Select app data and click on Start to transfer.

You can also choose other data to transfer from Android to iPhone with a click.

After selecting what app data you want to transfer, you'll wait for a while till it says the transfer is completed. After that, you can disconnect your devices, and check the apps on your new iPhone.

Phone Transfer has made it much easier to transfer apps from Android to iPhone or vice versa. Its simple interface makes it very easy to use. You don't have to learn anything, just follow the three steps to transfer whatever you want from one device to another, which saves you a lot of time. And most importantly, it works in all cases even if your iPhone is set up. You can simply choose the data and get it transferred without any hassle.

Back up and restore app data by Google Drive

The app data is more important than the app itself. Your Android apps can be easily downloaded from the App Store, but the data will not be on the new iPhone. If you want to transfer app data from Android to iPhone, Google Drive is also another excellent option.

On Google Drive, you can store 15 GB of data for free. Your app data would probably be below the limit. But if the data is over that, this method may not be suitable for you, or you'll have to buy additional space on Google Drive. And before you start, both your Android and iPhone should be connected to Wi-Fi and install Google Drive.

1. Open Google Drive on your Android device. By default, it is installed. If it is not there, you can get it from the Google Play.

2. Sign in to your Google / Gmail account. If you don't have one, create a new one first.

3. After that, tap on the menu icon. Go to Settings. You will see the Back and reset option; tap on it and turn on the Backup and Restore.

4. Google Drive will ask you the content you want to back up. Select App Data. You can also choose other files as you like.

5. Once done, tap on Backup Now. Then Google Drive will start creating a backup for you. It takes much time depending how much app data you're uploading.

6. When it's finished, grab your new iPhone and open Google Drive. Log in to the same Google account that you used on your Android device. Now, the synced app data will be available on your iPhone. You can restore what you want to your iPhone by downloading the app files.

Back up app data to Google Drive from the Android device.

Google Drive is an excellent tool for backup. It can also be used to back up the app data and transfer it between your devices, but the process is relatively slow. If you want to save time, it is better to use Phone Transfer.

If you have switched to an iPhone recently, you'll want to move your apps and also the app data to it. There are various methods we have discussed in the article to help you transfer apps from Android to iPhone. Move to iOS is the official tool of Apple, but it only works on new iPhones that have not been set up yet. Google Drive can also be used to transfer your app data, but it is time-consuming. The quickest and easiest way to transfer your apps from Android to iPhone is to use Phone Transfer which requires only a single click.

How to transfer files from iPhone to PC without iTunes

How to transfer photos from iPhone to Mac without iPhoto